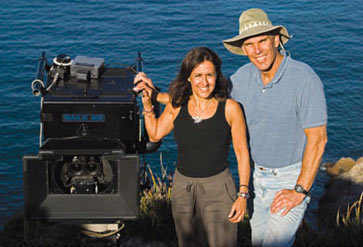 The Halls are veteran divers who specialize in underwater giant format film production. IMAX films produced and/or directed by Howard and Michele include Into the Deep, Island of the Sharks, Deep Sea 3D, and Under the Sea 3D. The Halls have also contributed to many other giant format productions including The Living Sea, Journey Into Amazing Caves, Coral Reef Adventure, Journey to the South Pacific, Humpback Whales and Lost Worlds.

The Halls have produced numerous award-winning television films for PBS Nature, National Geographic, the BBC and other broadcasters. They are the recipients of seven Emmy Awards, and numerous other industry awards and recognitions.

The Halls have strived to make family-friendly films that raise awareness of and increase appreciation for the marine environment. During the past 25 years, the films they have produced have been seen by thousands of children and adults. They have received positive feedback in letters, emails and in person from many who have said that not only have their films increased their knowledge of the marine environment, but they have also been the inspiration to turn career choices toward marine sciences and/or environmental issues.

Both Howard and Michele are recipients of the Academy of Underwater Arts and Sciences’ (AUAS’) NOGI Awards. In 2011 they were named Divers of the Year at Beneath the Sea, and were also inducted into the International Scuba Diving Hall of Fame. In 2013 they received the International Wildlife Film Festival’s Lifetime Achievement Award for Marine Conservation & Media. They were recognized by the Jackson Hole Wildlife Film Festival with the Outstanding Achievement Award for Natural History Filmmaking in 2015. In 2016 they were named as honorees of the 2016 Hans Hass Award. Additional accolades in 2017 include the Our World Underwater Outstanding Achievement Award and Beneath the Sea’s Diving Pioneer Award.

Howard holds a BS degree in zoology from San Diego State University. He is a member of the Directors Guild of America and the Academy of Motion Picture Arts and Sciences.

Michele is a Registered Nurse and holds a B.S. degree in Health Sciences. She is a member of the Television Academy of Arts and Sciences and the Women Divers Hall of Fame.

In honor of his achievements Torrance will be posthumously awarded the California Scuba Service Award at this year’s Scuba Show in Long Beach, May 6-7.

The world of commercial diving lost a giant recently. Torrance R. Parker (July 1928 – March 2017) was a Founding Director of the Historical Diving Society USA, an Advisory Board Member, recipient of the HDS Pioneer Award, and an inductee of the ADCI Commercial Diving Hall of Fame. He led an active diving career. Torrance owned a commercial diving business, Parker Diving Service, Inc., in San Pedro for nearly 40 years. He worked as a diver for 68 years, participating in all aspects of deep diving work including commercial diving — construction, salvage, maintenance, repair, and inspection of underwater engineered structures; military diving, including stints as an army diver and army diving trainer; and abalone fishery diving. He started as a sponge diver while still a teenager, when he learned this trade from Greek practitioners in Tarpon Springs, Florida.

At the end of the World War II, Parker moved to California to attend Sparling School of Diving and Underwater Welding in nearby Wilmington. In 1947, he founded Parker Diving Service. Like most commercial diving businesses at the time, Parker Diving Service began as a sole owner diving company. At age 19 Parker became the youngest diver in the Pile Drivers and Divers Union Local 2375.

In 1948, Parker married Tina Carreon, and they had six children. From 1950-1952, during the Korean War, Parker was trained in Army diving methods to work as an instructor and diver at the Army’s diving school in Fort Eustis, Virginia, as well as to provide diving services to their 3rd Port complex.

Upon retirement, he authored 20,000 Jobs under the Sea: A History of Diving and Underwater Engineering (1997). He subsequently developed and built the “20,000 Jobs under the Sea” exhibit for the Los Angeles Maritime Museum in San Pedro; the exhibit depicts the history of both commercial and fishery diving and includes that of Southern California’s earliest divers. Beginning in 1997, Parker conducted a survey of the Gulf of Mexico’s pre-World War II deep-water sponge grounds unworked since 1939 – a diving project that took three years to accomplish. He then wrote a deep and thorough account of sponge diving from ancient Greece to its current epicenter in Tarpon Springs, Florida, 20,000 Divers under the Sea: A History of the Mediterranean and Western Atlantic Sponge Trades with An Account of Early Deep Diving (2013). Both books are internationally acclaimed. Torrance continued to work closely with the Los Angeles Maritime Museum and the Historical Diving Society USA on historical projects for the remainder of his life.

In 2013, he made his last plunge beneath the ocean at the age of 85. He was wearing a vintage canvas diving suit, full brass helmet and big rubber boots in a demonstration aimed at educating people about the history of man’s centuries-old effort to conquer the world beneath the sea.