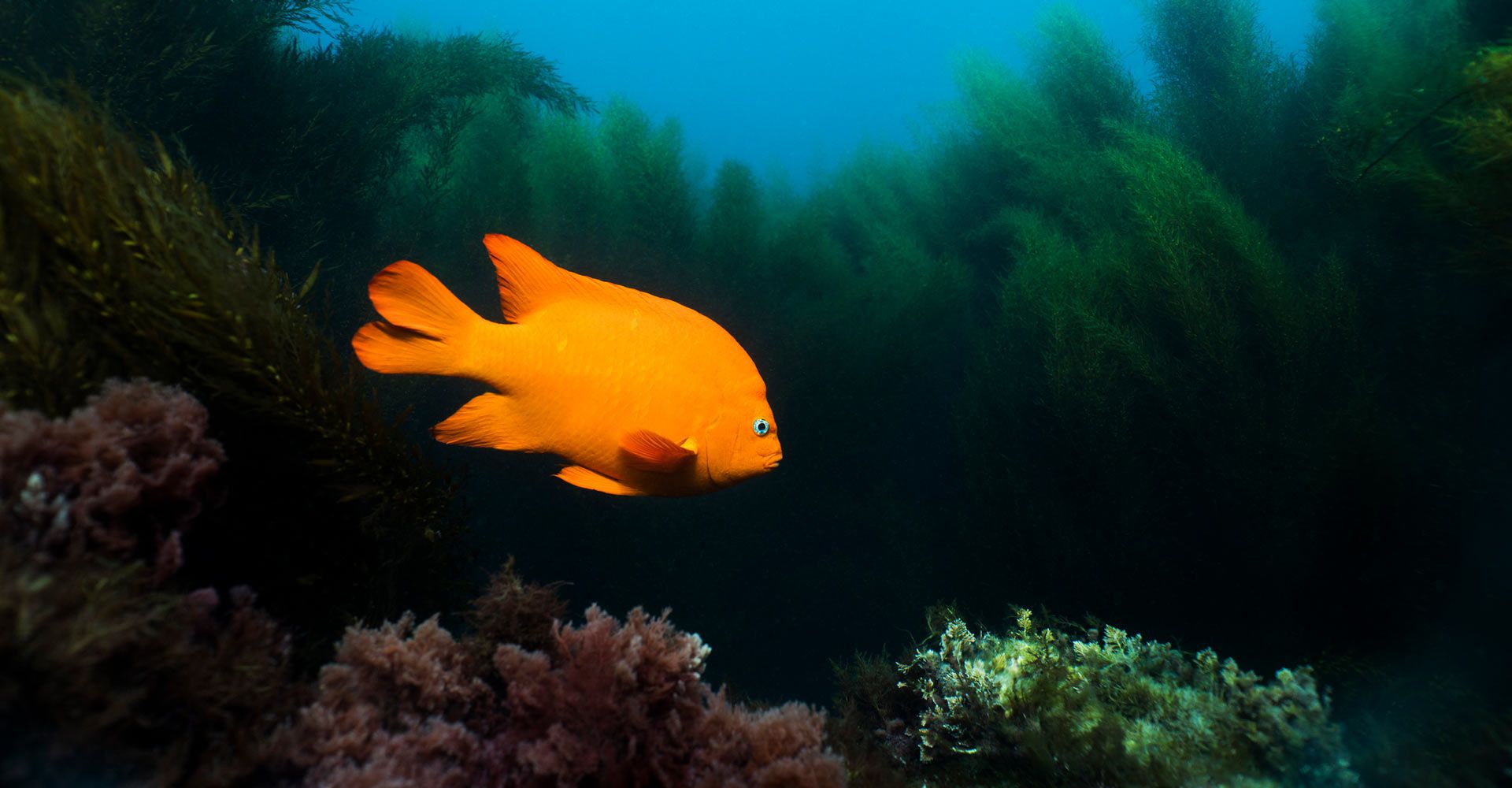 The California Scuba Service Award honors an individual that has had a profound influence on the California diving scene. It is awarded each year at the Scuba Show’s Saturday evening fundraiser. Please join us in the Bogart Lounge after the show on Saturday as we honor Leslie!

You are instantly drawn to his personality and his accent, but why is the California Scuba Service Award this year awarded to a Brit?

Born in London, England, Leslie Leaney started diving in 1969 around the island of Singapore. He progressed through the British Sub Aqua Club (BSAC) system and became a BSAC Instructor, Club Expedition Director, and eventually Diving Officer for BSAC Special Branch in Singapore. During a two-and-a-half-year period he personally trained several dozen divers and was responsible for the training curriculum of over a dozen instructors, the safety of over 70 active recreational divers, achieving a club safety record of zero incidents or accidents during his tenure.

In 1970, operating out of the port of Mersing, Leaney lead numerous diving expeditions off Malaya’s east coast, which recorded the effect of the Crown of Thorns starfish on coral reefs in that area. In 1971, prior to the rise of international diving tourism, Leaney led an expedition to the Perhentian Islands off the northeast Malay coast, and then another to the Maldive Islands. In 1972, after diving trips to Australia and New Zealand, he conducted a survey on behalf of the late King Hussein of Jordan, on the feasibility of establishing a dive center in the Red Sea port of Aquaba, Jordan. From this survey he authored one of the first articles on diving in the Red Sea, published by his friend Bernard Eaton in Triton magazine in 1972.  During the 1970’s he traveled extensively working with divers and instructors in England, USA, Malta, Saudi Arabia, and Oman.

In 1980 Leaney relocated to California and worked in the music industry with Guns ‘N Roses, Metallica, White Snake, B.B. King, his great friend Al Kooper, and other artists, on albums that have to date sold 34 million copies domestically. He also pursued his primary passion for diving and started to research diving history. Throughout the 1980’s Leaney compiled an extensive diving library and a collection of historical antique equipment. His archives currently provide reference research material for diving historians, and items from his collection are on display at various museums.

In 1992, his interest in history lead Leaney to co-found the Historical Diving Society-USA, (HDS-USA) with Kirby Morgan President, Skip Dunham. The inaugural meeting featured a mix of recreational, military, and commercial divers, and the Society continues to provide an educational forum for these separate, but connected, groups to learn about their joint history. During its 30-year existence Leaney has worn the hats of President and Executive Director, and under his guidance the Society grew from a few dozen members to over 3,000 members in over 40 countries. It is internationally affiliated with similar organizations.

In 1993 Leaney founded the Journal of Diving History, America’s first, and only, publication devoted to all aspects of diving history. As founding publisher and editor he introduced various columns, including the “Women Pioneers in Diving” column written by former Skin Diver magazine editor Bonnie Cardone. He also printed numerous historical articles translated from foreign language, including Russian, French, Japanese, and German, that had never-before been published in America. Working closely with his graphics partner Bonnie Toth and HDS President Jon Council, the Journal is now creating its own history as an American diving magazine as it nears its 30th anniversary issue.

Through his research, Leaney has written numerous articles that have appeared in international publications and has been the historical columnist for PADI’s Undersea Journal. He has lectured on the subject of diving history at seminars in France, Canada, Mexico, England, Cayman Islands and America. His research is referenced by numerous authors, and he has acted as a consultant for National Geographic Society, the History Channel, the B.B.C., the Discovery Channel, United States Navy, and other organizations.

During his international travels Leaney has assisted in strengthening the ties between America and divers many other countries who wished to record their own nations diving history. Leaney’s work with the Musee du Scaphandre in Espalion, France, and the World Festival of Underwater Images in Antibes, helped lay the foundation for the formation of HDS France. He was also instrumental in forming Societies in Russia, Asia, Germany, Canada, Mexico, and Southeast Australia and Pacific.

In 1997 Austrian diving pioneers Professor Hans Hass and his wife Lotte, invited Leaney to be their partner, and he started reintroducing them to the international diving community. His first step was to work with Ed Stetson in Santa Barbara, orchestrating their return to California in 1998 for a film festival in their honor. A stellar cast comprising of Zale Parry, Al Giddings, Stan Waterman, Ernie Brooks, Al Tillman, Sylvia Earle, Howard and Michele Hall, Emory Kristof, Bev Morgan, and Andy Rechnitzer presented at the festival. “It was the finest tribute occasion I have ever attended,” said Stan Waterman. The 2,000-seat venue sold out with attendees flying in from Europe and Asia.

In 2000 Leaney became a Founding Trustee of the Santa Barbara Maritime Museum (SBMM) and helped establish their exhibits of equipment that support the towns pioneering position as the international Birthplace of Deep-Water Mixed Gas Diving.

Leaney has consistently served the HDS since its founding, contributing thousands of volunteer hours in numerous areas of the Society’s administration. Fund-raising and sponsorship programs created and introduced by Leaney have raised in excess of $1,000,000 for the Society. He has played a pivotal role in the major developments in the Society’s history, including negotiating the strategic HDS affiliations with the Diving Equipment & Marketing Association (DEMA), the Professional Association of Diving Instructors (PADI), Divers Alert Network (DAN), the Beneath the Sea (BTS) non-profit corporation, the Association of Diving Contractors International (ADCI), the Santa Barbara Maritime Museum (SBMM), and other organizations. He retired from the HDS USA administration in 2011.

To ensure his diving research endures beyond his lifetime, in 2018 Leaney founded the Leaney – Beaver – Brooks Diving History Archive at the University of California, Santa Barbara (UCSB). Each year UCSB receives donations of specific sections of Leaney’s expansive diving library, which is curated by his longtime friend and colleague Nyle Monday.

In 2021 Leaney became the host and author of You Tube’s Diving into the Past series which features specific diving helmets. Produced in Santa Maria, California by Kirby Morgan Diving Systems, the series highlights some of the rarer helmets from diving’s past.

Leaney has served on the Boards of the Commercial Diving Hall of Fame, the International Scuba Diving Hall of Fame (ISDHF), HDSUSA, SBMM, and other educational organizations. He became a Director of the ISDHF in 2003, and introduced the ISDHF Pioneer Award category, developed, researched, acquired, and curated, the artifacts for the ISDHF Museum, and in 2015 became the organizations first Executive Director, a position which he still holds today.

Among the awards recognizing Leaney’s contributions to the diving industry are the DEMA Reaching Out Award, the Academy of Underwater Arts and Sciences (AUAS) NOGI Award, the Beneath the Sea Diver of the Year Award, the Wyland Foundation ICON Award, and Honorary Lifetime memberships in the Historical Societies of Russia, Canada, and Southeast Asia, Pacific. Leaney is an inductee in The International Scuba Diving Hall of Fame, the Commercial Diving Hall of Fame, the California Wreck Divers Hall of Fame, a Fellow of the Explorers Club, and, by the personal nomination and sponsorship of Major Christian J. Lambertsen, recognized as the “Father of American Combat Diving,” a Lifetime Member of the U.D.T. Seal Association.

An incredible resume — overqualified perhaps for this award — which gives us the honor to present it. For turning his passion for diving’s history into a way for thousands to understand and discover theirs, we are proud to honor Leslie’s enormous contributions to the California diving scene with the 2022 California Scuba Service Award.