In the early 1940s Chuck Nicklin moved with his family from Massachusetts to San Diego, California. That’s when, as a young teenager, Chuck first admired the ocean from the cliffs above La Jolla cove. Using a borrowed mask, he explored the kelp forest, beginning a lifelong love affair – and a lucrative career – in the sea.

After serving in the Navy near the end of Word War II, Chuck went to work in the family’s grocery business, gaining valuable retailing experience that would ultimately take him to the business of diving. In June, 1957 he and several other pioneers in the fledgling sport of scuba diving – including Connie Limbaugh, Jimmy Stewart, Dr. Wheeler North and Andy Rechnitzer – founded the Diving Locker, a retail operation that would serve southern California divers for more than 40 years. Chuck taught scuba classes, sold gear and learned to design and manufacture wet suits at the Diving Locker.

Chuck’s friend, photographer Ron Church, opened a photo school in a back room of the store. Church owned a Rolleimarine underwater camera, and shared it with Nicklin. The two would dive, each man taking six of the 12 exposures on a roll of film and then they’d return to the Diving Locker to develop the film and study their results. That was Chuck’s start as an underwater photographer.

Heading to a dive site north of La Jolla one morning, Chuck and his dive buddies spotted a whale struggling to remain at the surface. The whale was entangled in a heavy trawling net and in danger of drowning. Chuck and his dive buddy, photographer Bill DeCourt, entered the water with their cameras, saved the whale and photographed the dramatic rescue effort. News of their heroic efforts attracted media attention, and the following morning a photograph of Chuck, sitting atop the whale, appeared on the front page of the San Diego Union-Tribune newspaper. Overnight, Nicklin became known as, “the man who sat on a whale.” 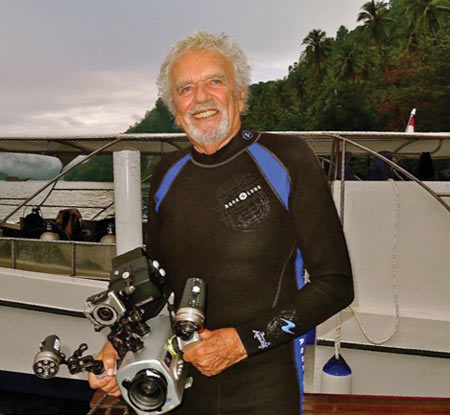 As an underwater cinematographer, Chuck Nicklin has enjoyed a long and heralded career, having teamed up with close friend Al Giddings on such notable films as The Deep, The James Bond Classic, For Your Eyes Only, and The Abyss.

His film credits also include the Ocean Quest television series, which had him traveling to various locations, including the Antarctic, Truk Lagoon, Cuba, Mexico’s Baja Peninsula, and Newfoundland. Chuck also worked on the IMAX film, Nomads of the Deep, which chronicled the lives of humpback whales in their habitats off the islands of Hawaii and in the Red Sea.

Nicklin and his wife Roz continue to lead dive trips all over the world. He is currently writing a book about his adventures, which is due out later this year.

Among his many awards, in 2014 Chuck was inducted into the International Scuba Diver’s Hall of Fame. We are proud to honor his enormous contribution to the California diving scene with the 2015 California Scuba Service Award.

Emmy Award-winning Chuck Nicklin’s Feature film credits include The Abyss, The Deep, James Bond Classics For Your Eyes Only, Never Say Never, and Love Is Forever. Nicklin’s documentaries include “Gentle Giants of the Pacific,””Behind the Scenes of The Abyss,” Nomads of the Deep,” and “In the Company of Whales.”